Posted on November 6, 2020 by Elizabeth Payseur

“So we’re watching this very carefully in anticipation of the fact that for the first time, in Australia, laws will need to be used on a scale that will present a different experience for Australia.”
Attorney General, Christian Porter, Doorstop – Parliament House

Below are a number of indicators that the coronavirus is, essentially, a globally orchestrated “live exercise” in managing a pandemic (preceded in October last year by Event 201, a “pandemic tabletop exercise“). We can infer that the alleged purpose of this exercise is really a flimsy pretext for fear-mongering instigated by the global power elite in order to exercise better control – there are about 8,500 of them and 7 billion of us. The scope of social control laid bare by this pandemic is truly scary. What social controls will be implemented and how this event will be used as a pretext for blaming looming economic problems only time will tell.

Most importantly, however, the power elite always give us the chance to opt out of the response they wish to instil in us. Whenever they hoax us, they always provide deliberate signs, for example, obvious signs of fakery, over-the-top ridiculousness, contradictions, different versions of the story, physical impossibilities, poor expression, grammar and spelling (beyond what might be termed “sloppy journalism”), smiling grievers, lack of explanation where it is expected, Masonic numbers and symbols, the actual truth (or distorted version of it), etc.  They are also meticulous in never faking a single piece of evidence so well that it can be used by someone who believes their story to brandish it in defence of it. See They Tell Us Clearly for examples.

As responsible citizens it is our duty to call out the power elite when we can identify a very large number of anomalies in the story they drown us in with, additionally, not a single skerrick of evidence to support it.

1. Lack of clear evidence of reality of the pandemic but clear evidence of fakery
There is no clear evidence of the reality of a coronavirus pandemic. We are told of deaths and infections but all we see are lots of the general population and medical staff running around in masks and other protective gear. a man lying on a hospital floor and a person, most unrealistically, falling flat on their face. There is nothing that favours “real” over “live exercise” for a coronavirus pandemic while there is much that favours “live exercise”, assuming we include deliberate anomalies as part of the MO of a “live exercise” over “real”. I ask the reader to consider this very important question: when there are clear anomalies in a story that undermine its reality, what reason is there to believe any part of it without clear evidence?

2. No ability to isolate virus
The ability for such a virus to be isolated and thus be identified in a sufferer seems impossible. A person who identifies himself only as Tony but seems reasonably authoritative in the field of virology says this:

Question: What is the gold standard if it isn’t antibody testing, PCR or clinical diagnosis?

The ‘gold standard’ is laboratory isolated/purified coronavirus particles free from any contaminants and particles that look like viruses but are not, that have been proven to be the cause of the syndrome known as COVID-19 and obtained by using proper viral isolation methods and controls (not PCR or Serology /antibody tests which do not detect virus as such).

This will never happen (short of a miracle!) because of the various constraints imposed on mainstream virologists and microbiologists. So yes, no isolated virus = no gold standard of comparison for any genetic material found, therefore no coronavirus and no COVID-19 per se apart from opportunistic infections that are common and pneumonia grouped under that acronym to ‘fit the frame’.

You can debate this issue till the cows come home but only concrete scientific proof of this virus and proof of its ability to cause disease with proper controls, will determine the truth of the matter leaving aside all of the other possible issues discussed on this thread including, Psyops, false flag, as a silent weapon to see how the population will react for even worse things to come, and all the other ifs, and buts and whys and wherefores.

3. Two species of snake, Chinese cobra and many-banded krait, are wildlife reservoirs of virus?
Chinese researchers, led by Wei Ji, a microbiologist at Peking University Health Science Center’s School of Basic Medical Sciences state, “the codons preferred by 2019-nCoV [are] those preferred by a handful of potential hosts that include: humans, bats, chickens, hedgehogs, pangolins, and two species of snakes”.

When it is said about coronaviruses …
“Coronaviruses are a group of viruses that cause diseases in mammals and birds. In humans, the viruses cause respiratory infections which are typically mild including the common cold but rarer forms like SARS and MERS can be lethal. In cows and pigs they may cause diarrhea, while in chickens they can cause an upper respiratory disease. There are no vaccines or antiviral drugs that are approved for prevention or treatment” …

4. Chinese snake theory peer-reviewed and published in journal. Said of by Australian zoologist “It’s complete garbage.”
We are told in the research article Wei Ji and his team published in the Journal of Medical Virology:

Results obtained from our analyses suggest that the 2019‐nCoV appears to be a recombinant virus between the bat coronavirus and an origin‐unknown coronavirus. The recombination occurred within the viral spike glycoprotein, which recognizes cell surface receptor. Additionally, our findings suggest that snake is the most probable wildlife animal reservoir for the 2019‐nCoV based on its RSCU bias resembling snake compared to other animals.

But in response to this paper:

“It’s complete garbage,” says Edward Holmes, a zoologist at the University of Sydney’s Institute for Infectious Diseases and Biosecurity, who specializes in emerging RNA viruses, a class that includes coronaviruses like 2019-nCoV. 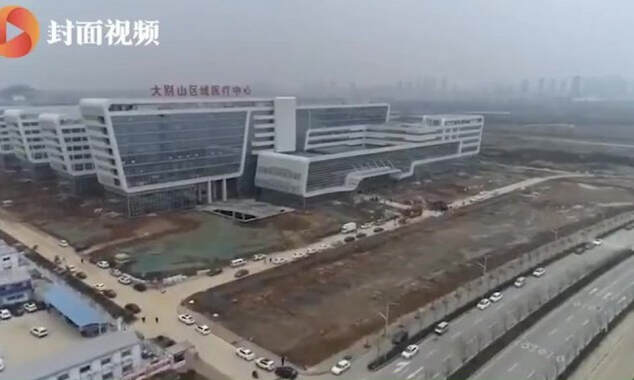 Story 2: Building of a hospital from scratch – I’ve seen media reports for 4 days, 6 days, 9 days and 10 days!
China is building special coronavirus hospital to treat 1,000 in just SIX DAYS -The Mirror, 26 January, 2020Amazingly, according to the time-lapse video below, it seems the hospital was, in fact, built in a very short period but however short the period was a great deal of time in planning and pre-fabrication would have had to occur. This hospital was planned, it wasn’t built in response to the sudden coronavirus pandemic. And the hospital will most certainly not be just equipped to handle coronavirus cases whatever the number of cases is.
7. People: lying on floor, falling flat on face, dead on street
Do you find this person laid out on the floor and another falling flat on their face convincing as sufferers? And what about the man stretched out in the video shown within the article, Coronavirus: Man found dead in street in face mask in shocking image in the Independent,8. Anomalies in interview with asymptomatic cruise ship passenger
There are a number of anomalies to be found in this 10-minute interview conducted by a CBC news anchor with Rebecca Frasure, a Diamond Princess passenger.

9. Recognised hoax within alleged real event
A common feature of hoaxes is to fabricate a “recognised” hoax within the larger unrecognised hoax. In the article below, we’re told that a passenger declaring he had the coronavirus caused the pilot to return to Toronto (2 hours into a 4 hour flight to Montego Bay), however, once arrived back in Toronto the passenger was declared not to be suffering from the virus. Flight records show that WestJet flight 2702 did indeed return to Toronto, however, this doesn’t mean that the return wasn’t planned and staged as part of the “live exercise”. Perhaps it serves as advertising for WestJet, promoting the message they take the utmost care.
Woman frustrated as coronavirus hoax forces plane to turn around – Bradford Today (Canadian local press), 5 February 2020​

10. Netflix series coincidence?
Is the Netflix docuseries on preventing a pandemic a coincidence?11. Pandemic tabletop exercise in 2019 October coincidence?
And is Event 201, an event partnered by the Johns Hopkins Center for Health Security, the World Economic Forum and the Bill and Melinda Gates Foundation, a high-level pandemic exercise on October 18, 2019, in New York a coincidence?12. “Phoney-baloney” health scare presaged in the Simpsons, 2010
And is the talk of instigating the next “phoney-baloney crisis” of a public health-scare which shouldn’t be a “made-up disease” but where the only “moral thing to do is release a deadly virus into the general public” in The Simpsons a coincidence? (Season 22, Episode 6, “The Fool Monty” (transcript), first aired November 21, 2010?
The description of the episode is:
Mr. Burns is branded a social pariah after buying all the vaccinations created for a fictitious illness cooked up by the media, and ends up as The Simpsons’ latest houseguest after a suicide attempt.

14. Is the Coronavirus scare just one on a continuum?
Evidence of staging for both Ebola and Corona. (5 min)
Video on Coronavirus Zika Ebola Anthrax (33 min)